Affronting the wide expanse of the Bay of Bengal, Andhra Pradesh is often known for a more subtle and relaxed atmosphere. Possessing the second longest coastline of all the states, the region is fed by two major rivers, the Godavari and the Krishna as well as a myriad of lesser ones that run through this lush jungle state. It is separated into three regions: Telegana, the northern plateau; Rayalaseema, the southern region; and Coastal Andhra along the Bay of Bengal. The mountains of the Eastern Ghats are a major dividing line in the state’s geography, being home to dense tropical forests that give way to shrub vegetation on the Deccan Plateau. The climate of Andhra Pradesh varies considerably, as it depends on the geographical region and the monsoons that play a major role in determining the climate of each specific region. Historically called the “Rice Bowl of India”, Andhra Pradesh holds a significant position in the provinces of the world with more than billion dollar gross domestic product, most of that is due to its copious rice production. Hyderabad, situated at the crossroads of North and South India, is noted for its unique culture which includes well established local traditions in art, literature, architecture and cuisine as well as a historic global center of the diamond and pearl trade. The city of Tirupati is famous for the richest temple in India, VenkateswaraSwamy, dedicated to Lord Venkateswara and located in the Tirumala hills. One of the most important pilgrimage centers in the world, the temple draws millions of pilgrims annually and is known as the busiest pilgrimage center in the world. With southern India holding claim to so many unique parts of the South Asian culture, visitors are urged to make tracks to one of the southern Indian states, Andhra Pradesh being one of the more unique. below is famous tourist city places to visit in Andhra Pradesh.

Hyderabad Situated between North and South India, Hyderabad is famous for its unique culture which includes established local traditions in art, literature, architecture and cuisine. Known as the “City of Pearls”, Hyderabad was a global center of the diamond and pearl trade and has recently emerged as a hub for the information technology, pharmaceuticals and biotechnology industries. The city has as many as 140 lakes which are referred to as sagar, meaning “sea”, such HussainSagar, Osman Sagar and HimayatSagar. Whether one arrives with solely a tourism itinerary or perhaps a scenic detour from a business venture, Hyderabad can offer the visitor many options to explore the local culture and attractions.

Old City: The historic part of the city established by Muhammad QuliQutb Shah lies on the southern banks of the Musi River. This area is full of picturesque Islamic monuments as well as various tombs, mosques, palaces and fine homes that lie tucked away on small side streets. The New City encompasses the urbanized area on the northern banks and both sides are connected by numerous bridges that allow easy transit back and forth.

Laad Bazaar: Located in the shadow of Charminar, this often hectic yet always charming marketplace is a fabulous source for any and all items on your shopping list from the commonplace to the exotic. Elegant fabrics, fine perfumes, sparkling jewelry and novel musical instruments will fill out a visitor’s shopping list in short order while tasty snacks, useful household items and authentic sandals can serve one’s everyday purposes all in one fell swoop. 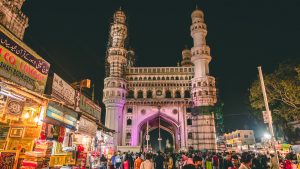 Charminar: Built in 1591, this mosque is one of the principal landmarks of Hyderabad and is noted as among the most recognized structures of all of India. Translating to “four towers”, the name refers to the four ornate minarets that loom high above the massive structure yet also define its elegant and romantic Islamic style. The graceful structure is illuminated boldly at night and commands a spectacular presence for all visitors, even from a great distance away.

Mekkah (Mecca) Masjid: With the claim to fame as one of the oldest mosques in Hyderabad and one of the largest mosques in all of India, Makkah Masjid is an immense and imposing structure that also possesses a finely detailed gracefulness as well. The central arch of the mosque was built from bricks formed from soil brought from Mecca, the holiest site of Islam, thus giving the mosque its name. Visitors will enjoy the elegant domes, graceful spires and stately columns, all of which are ornately decorated with floral motifs and friezes.

Salar Jung Museum: This collection is the third largest museum in India and contains an impressive inventory of sculptures, paintings, carvings, textiles, manuscripts, ceramics, metallic artifacts, carpets, clocks and furniture from cultures across the world. The museum is well known throughout India for its prized collections belonging to different civilizations dating back to the 1st century and will certainly provide a trove of information for history buffs.

Falaknuma Palace: One of the finest palaces in Hyderabad, the name translates to “mirror of the sky” and houses some of the finest treasure collections including rare paintings, statues, furniture, manuscripts and books in its 220 lavishly decorated rooms and galleries. A recent renovation project converted the palace into an elegant hotel where the rooms and halls are decorated with ornate furniture, rich handcrafted tapestries and brocade from France as well as a splendid array of Venetian chandeliers.

Golconda Fort: This impressive 16thcentury stronghold was constructed atop a granite hill to withstand attacks from the Mughal armies. Now entailing acres of preserved ruins, this fort provides visitors with endless exploration opportunities. With Hyderabad situated in the heart of the diamond trade, the fort contained a vault that was used to store such notable gems as the Hope and the Kohinoor Diamonds.

Although Tirupati itself is a large city with temples and shrines of its own, the main draw for this metropolis is its proximity to the ShriVenkateshvara temple at Tirumala Hill, located 20 kilometers away in the Venkata Hills. 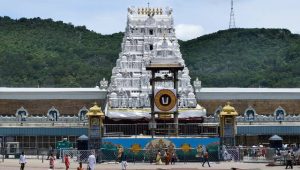 ShriVenkateshvara Temple at Tirumala: Well known as the busiest pilgrimage site in the world, even exceeding Mecca, the ShriVenkateshvara temple attracts as many as 40 million devout pilgrims from around the world to perform pujaat the sacred site each year. Surrounded by wooded hills that are capped by a ring of vertical red rocks, the temple offers a beautiful setting despite the throngs of devotees streaming into the temple to make offerings to the temples and the deities within.

Govindaraja Swamy Temple: Being one of the most important temples in the city of Tirupati, it has an imposing gopuram, the ornate and monumental tower, which can be seen from a great distance. Consecrated in 1130, there are 18 sub-temples on the premises that visitors may wander amongst.

Kodanda Rama Swamy Temple: this temple for Lord Rama and his wife devi Sita and your younger brother Lakshmanaare, the presiding deities of this temple, with Lord Anjaneya Swamy seen near the foot of Lord Rama. The temple is in the heart of the city and offers a serene atmosphere for devotion. 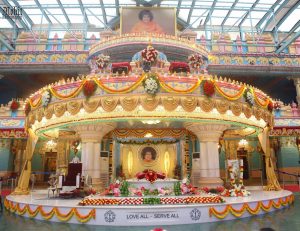 This small town in the inland foothills of Andhra Pradesh has the primary claim to fame as the birthplace and seasonal residence of the notable spiritual teacher SathyaSai Baba. The town’s main attraction is Baba’s PrasanthiNilayam ashram, a name that translates to “Abode of the Highest Peace”. The ashram was built in 1950, a hospital built in 1957 and an auditorium accommodating 15,000 persons was added in 1973 as the numbers of followers continued to grow. Guests are welcome to attend darshan ceremonies held by Baba twice daily. Long term guests may also become part of the community in the ashram, provided that typical behavioral policies are adhered to.