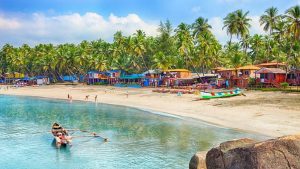 Nestled on the western coast and looking out onto the vast Arabian Sea, Goa is a model of unique incongruities in India. It is India’s smallest state by area and is also the country’s richest state with a per capita gross domestic product of two and a half times that of the country as a whole. Goa is ranked the best for its infrastructure, has placed first for the best quality of life, is known for its laid-back lifestyle but is also inherently challenged by its own popularity. Still, it is treasured for its slice of paradise that beckons to all those needing a relaxing respite from the hectic world at large. Primarily influenced by its Portuguese-based history, the city of Panaji offers terraced hills dotted with brightly colored concrete buildings that display quaint balconies and red-tiled roofs plus tall white Latin styled churches and elegant promenades. Renowned for its beaches, places of worship and world heritage architecture, Goa is visited by throngs of both international and domestic visitors each year. Come

Meaning the “Land that Never Floods”, Panaji is the capital of Goa and is its third largest city. With a pronounced Portuguese influence since the early 16thcentury, the city has terraced hills dotted with brightly colored buildings that display quaint balconies and red-tiled roofs plus tall white Latin-styled churches and elegant promenades. The care-free ambiance of the city encourages visitors to adopt a relaxed attitude in return.

Our Lady of the Immaculate Conception: This grand Baroque church, erected in 1540, stands as an iconic example of the Portuguese influence with its whitewashed “wedding cake” style of architecture, complete with tiers of arches above and colonnades of zig-zagging staircases below.

Secretariat Building: Also built in the 16thcentury, this Colonial style building was originally the palace for the Muslim ruler Adil Shah. Subsequently sequestered as the Viceroy’s official residence during the British Raj, this stately building is now home to various government offices.

Goa State Museum: With a region peppered with the cultures of such a diverse nature, this museum is likely the perfect spot to get your bearings as to the storied past of the state of Goa throughout the centuries.

Dudhsagar Falls: Translated as the “Sea of Milk”, this section of the Mandovi River lies about 60km from Panaji. The Dudhsagar Falls closely resemble this image of a cascade of milk in the shape of a large dress, a tribute to the virtue and modesty of the Princess.