Tamilnadu is situated southern part of the Indian Peninsula, it is home of natural resources, , hill stations, beautiful beach resorts, many Hindu temples of Dravidian architecture multi-religious pilgrimage sites, it is also famous for eight UNESCO World Heritage Sites. The state has a long history of venerable culture and a rich tradition of literature, dance, music. It is also famous for special cultural features like Bharatanatyam dance, Tanjore paintings and Tamil architecture were developed here and still be practiced to the present days. The region’s history dates back to prehistoric times with archaeological evidence pointing to this area being one of the longest continuous habitation points in India, supported by evidence from the Neolithic Period 3800 years ago. Today the state rates as the most urbanized in India and has one of the highest literacy rates as well. Chennai, the state’s largest city, it is a major commercial, cultural, economic, and educational center in India. Chennai is an important center for music, theater, and traditional dance with many large cultural events attended by hundreds of artists. This lush green state is just the place for visitors who wish to find the juxtaposition of the jungle, forest, and plenty of nearby open sea.

Located on the east coast facing the Bay of Bengal, Chennai (formerly known as Madras) is a major commercial, cultural, economic, and educational center in India. Chennai is the most important center for Karnatic music and every year they organized a big cultural program in city and hundreds of artiest give performances in this event. Though the tropical weather is hot and humid for most of the year, Chennai’s proximity to the coast insulates it from most of the extreme variations in seasonal temperature. Those seeking the rich culture of southern India should be sure to include Chennai as part of their adventure.

This temple of Shiva is located in Mylapore, a suburb of Chennai. As per Hindu holy book the Vedas power (Goddess Parwat)  is worshipped of Lord Shiva in the form of a peacock or Mayil (Mayil is the meaning of peacock in Tamil)

This Roman Catholic church was built in the 16thcentury by Portuguese explorers and was rebuilt again with the status of a cathedral by the British in 1893. In 1956, Pope Pius XII raised the church to the status of a Minor Basilica and in 2006 it was declared a national shrine by the Catholic Bishops’ Conference of India. The San Thome Basilica is biggest pilgrimage center for Christians in India.

This urban beach runs along the Bay of Bengal for a distance of 13 km, making it the longest urban beach in the country and the second longest in the world. With an average width of 300 meters, the beach is primarily sandy, making it far more popular than many Indian beaches that tend to be rockier. Here on the beach of Marina people are prohibited for bathing and swimming because it is dangerous for life of people, here family tourist and Chennai people come to here for enjoy on beach so it is busiest beach in the India.

Although one of the smallest parks in India, it is one of the very few national parks situated inside a city. The park is situated inside the Chennai governor’s property or estate; inside the forest area, you will beautiful lakes, scrublands, and streams. Despite its urban surroundings, it hosts 400 blackbucks, 2,000 spotted deer and a wide variety of other mammals, reptiles, and birds.

This is a popular and famous monument in Chennai, also this tamil monument dedicated to famous classical Tamil saint and poet, philosopher “Thiruvalluvar”. It was built in the year 1977; it resembles a 39-meter high temple chariot with a statue of Thiruvalluvar.

Established in 1851 and also known as the Madras Museum, it is the second oldest museum in India, the first being the Indian Museum at Kolkata.

This site is commemorated as the site where Swami Vivekananda stayed for nine days when he visited Chennai in 1897. Vivekananda is known as the Hindu monk responsible for bringing the philosophies of Vendanta and yoga to the western world. Vivekananda Home is change into the permanent musums on Indian culture and also brief information about the Swamiji’s life, thousands of people come to this place every years

Madurai is city situated on bank of south India River Vaigai, The city is constructed around the holy temple of Madurai meenakshi temple, it is approxmily 2500 years old city , The word Madurai originally comes from Madhura (it is meaning sweetness) came out of the amrita (meaning in english divine nectar) raining on the city from the Hindu Lord Shiva’s matted hair. The city is built around the Meenakshi Amman Temple, which acted as the geographic and ritual center of the ancient city with concentric quadrangular streets radiating from the temple.

One of the most prominent landmarks of the city, this historic Hindu temple is dedicated to Parvati, known as Meenakshi, and her consort, Shiva, known as Sundareswarar. The temple is given an important symbol for the Tamil speaking people and it has been described in ancient times in Tamil literature, the present structure of temple was constructed in the half seventeenth century. The temple attracts 15,000 visitors a day, a number which grows to nearly 25,000 on Fridays. There are an estimated 33,000 sculptures in the temple, which occupies a total of 45 acres.

This ancient Vishnu temple is located very close to the Meenakshi Amman Temple and is said to be one of the 108 divyadesams, the holy abodes of Vishnu.

The oldest Muslim place of worship in Madurai, it was constructed during the 13thcentury and can accommodate about 2500 people.

Located on a hill outside of Madurai, this temple is the first among the six holy abodes of the Hindu god Murugan and this is also the famous tourist spots, domestic and international tourist visited this temple, Visitors will notice the wide range of Hindu gods carved on the walls of the temple.

Officially named Tiruchirappalli (formerly called Trichinopoly by the British and nicknamed both Tiruchi and Trichy), this city apparently got its name from the three-headed demon Trishira who meditated on the Hindu god Shiva near the present-day city. The full name of the city is not commonly used and visitors will find that Trichy is the most commonly used name.

The Our Lady of Lourdes Church:

This Roman Catholic Basilica is devoted to Our Lady of Lourdes and stands with a classic neo-Gothic silhouette against the sky. The interior sports a set of large painted scenes depicting the crucifixion and other Catholic iconography. One crossover detail to note while walking inside is that the icons of Virgin Mary are draped with garland flower necklaces of a Hindu style.

With its name derived from Tanjan, a legendary demon in Hindu mythology, Thanjavur is an important center of South Indian religion, art, and architecture. The city is an main agricultural center and is known as the “Rice Bowl of Tamil Nadu”.

This temple is one of India’s most award-winning architectural sites,  Constructed in 1010 to the god Shiva, the temple stands amidst fortified walls that were likely added in the 16thcentury. Guests to the temple will notice a very large statue of Nandi, the sacred bull, carved out of a single block of granite measuring five meters long and four meters high. Designated a UNESCO World Heritage Site in 1987, the temple has also been described as “a landmark in the evolution of building art in South India”.

This Palace was belonged to family Bhonsle family those ruled on the Thanjavur area from 1674 to 1855. It was originally constructed by the rulers of Thanjavur Nayak kingdom and after their fall, it served as the official residence of the Thanjavur Marathas until the area was annexed to the British government.

Located within the premises of the Thanjavur Maratha Palace, this library was established in the early 18thcentury and contains over 24,000 Indian manuscripts written in Sanskrit on palm leaves.

the Gallery you will find inside the Palace, it was huge gallery and lager collection of stone Sculptures and bronze icons  from the 9thto the 12thcenturies related to tamil history.  Here you will see idols present in the gallery were collected from various temples in the Thanjavur district. 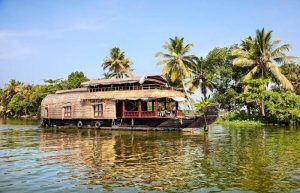 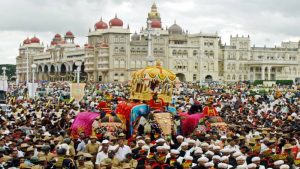