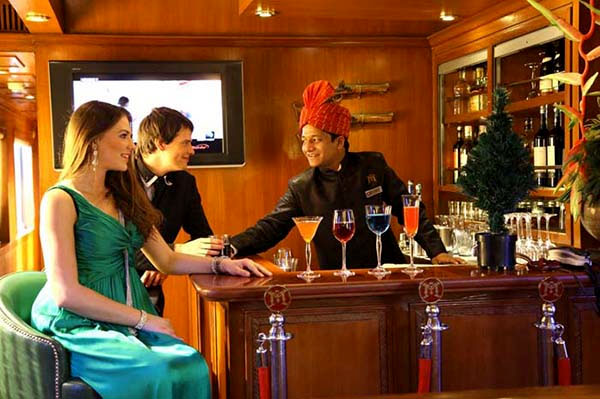 Discover India through Maharaja’s Express itinerary “The Indian Panorama” 6 nights / nights 07 days Package. Explore Taj Mahal in Agra, Seek the Bengal Tiger in Ranthambore, visit Land of Maharaja city called Jaipur, and explore holy city of India called Varanasi where you will attend Ganga Arti in Holy River Ganges, visit Khajuraho is one of the most popular tourist destination in India. Khajurao is famous for its ancient temples that depict some of the finest art and sculptures.

A great journey starts from Safdardjung Station in Delhi. After registration and other formalities, you will be greeted in a traditional Indian style. A luxury train leaves for Jaipur.

08:30 Hrs: Train will from Depart for Jaipur from Delhi

15:00 Hrs: Get off from train and go for city tour Visit to the galleries of the City Palace, followed by Exclusive dnner at the Rambagh Palace Hotel

20:30 Hrs: Return to Maharaja Express. Night on the train

The day prepares to continue exploring the sights of Jaipur, the famous capital of the Indian state of Rajasthan, founded in 1727.

08:00 Hrs: Visit to Amber Fort situated on the top of Hill

12:30 Hrs: Return to Maharaja Express and Lunch on board.

The train arrives in Sawai Madhopur railway station early in the morning. You will go on a safari to Rantambore National Park and watch tigers in their natural habitat. After spot tigers return to your train and enjoy Breakfast and lunch.

Then the train will arrive in Fatehpur Sikri and you will visit the famous “ghost town”, the former capital of the Mughal dynasty.

09:30 Hrs: Return to Maharaja Express for Breakfast or Relax

Arrive in Agra in the early morning and visit the Taj Mahal, one of the seven wonders of the world, a UNESCO World Heritage Site.

06:30 Hrs: Arrival in Agra and visit to the Taj Mahal on the time of Sunrise

09:30 Hrs: Enjoy Breakfast with champagne in the restaurant Taj Khema

13:00 Hrs: Lunch on board. After lunch -  You can choose optional tours ( Pay directly): Spa at the hotel or  Tour to  Itimad-Ud-Daul Tomb, a Mughal monument that locals call “Little Taj”; Tour  to Agra Fort; a city tour or Evening tour to the Mohabbat-e-Taj Show, a theatrical show about the Taj Mahal.

19:30 Hrs: Dinner on board train and overnight stay in train

You will wake up in a new place, have breakfast and go to Orchha. After a sightseeing tour return to the train

After lunch on the train and upon arrival in Khajuraho, you will visit the western group of temples included in the UNESCO World Heritage List.

10:00 Hrs: Return to Maharaja Express and departure to Khajuraho

15:30 Hrs: Arrival in Khajuraho railway station and Proceed to visiting the western group of temples

18:00 Hrs: Return to the train. Possibility to choose from an additional optional tour: Spa at the hotel, Indian National Dance Show or Sound and Light Show in the historical complex of temples.

23:10 Hrs: The train will depart from Khajuraho for Varanasi

Early Morning you will arrive Holy city of India called Varanasi.. You will visit the Buddhist pilgrimage center of Sarnath, see how magnificent Banarasi silk sarees are woven, take a ghat boat ride on the Ganges River and attend the aarti ceremony.

12:00 Hrs: Arrival in Varanasi. Proceed for Lunch at the Taj Gangjis Hotel

14:30 Hrs: Visit Sarnath &  then a trip to the silk production center

19:30 Hrs: Exclusive Vegetarian Dinner in Bridgram Palace hotel with a Kathak dance performance (one of the styles of Indian classical dance)

21:15 Hrs: Late night our train will depart for Delhi

Breakfast and lunch will be served on the train, after  Lunch  the train will arrive in Delhi and the journey will come to an end.

Today we will return to Mumbai Chhatrapati Shivaji Station after breakfast. End of your memorable Journey

Prices does not include: