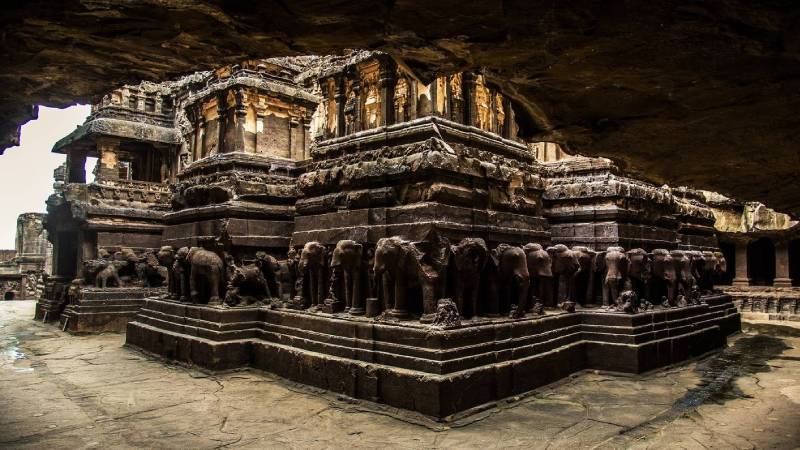 This Tours gives you the opportunity to see and experience a lot of local life, Holiest places of Hindus, Buddhist, and Jain’s experience a lot of local life. Explore the Delhi, Agra, Jaipur, Varanasi city, all the highlights of north India can be combined. Then we explore the Economy capital and Bollywood city of India Mumbai, Excursion to Ajanta and Ellora Caves in Aurangabad.  Then we had to South India trip combines cultural, Temples, and natural experiences: You start to Badami, Pattadakal, and Aihole, where you will encounter treasures of the ancient Indian cave and temple architecture. Travel to the mysterious temples of Hampi, Holy temple of Tamilnadu Meenakshi temple in Madurai our last visit to East India explore Konark Sun Temple, excursion to the Lalitgiri, Ratnagiri caves.

Excursion to the beautiful City Hampi

Visit of Caves- Khandagiri and Udaygiri

After breakfast visits the famous Akshardham Temple. Akshardham displays the essence of India’s art and culture in its awe-inspiring structure. It is made of salmon-colored sandstone and white marble contains around 20,000 carved deities and reflects traditional Orissa, Gujarati, Mughal, and Rajasthani architectural elements. The Akshardham monument, built without steel. Here you also see the life of Swami Neelkanth through various stages of life – most interesting.

Later continue with combined sightseeing of Old & New Delhi, Visit of Old Delhi where we will see Jama Masjid, Red fort from outside, enjoy a rickshaw ride in the busiest wholesale market Chandni Chowk.

Arrived Agra  Proceed sightseeing tour of Agra with a Guide visiting the world-famous Taj Mahal &  Agra Fort – Built by Emperor Akbar on the west side of the Yamuna river.

After breakfast check-out and drive to Delhi airport to board an onward flight to Varanasi. Evening visit Ghats of Ganges River to enjoy and witness the prayer ceremony

Early morning boat cruise on river Ganges. Return to the hotel for breakfast and then proceed for half day sightseeing of Varanasi   Visit the Bharat Mata Temple, Durga Temple and drive past  Banaras Hindu University

Post Lunch at Local restaurant / hotel proceed to visit important holy site of Buddhist called Sarnath, this holy site is Located just only kilometer from hindu holy city Varanasi, this is place where Lord Gautum Buddha taught his first sermon  to his followers.

After breakfast check-out from your hotel and transfer to Varanasi airport to board flight for Mumbai.

Afternoon we will start the Mumbai city Tour our first visit Gateway of India- this is mumbai’s principle landmark, Prince of Wales Museum, Mani Bhawan, Jain temple. Then we will drive around the Afghan Church,  Haji Ali Mosque- a shrine in honor of a Muslim Saint.

After breakfast Excursion to Elephanta Caves (Closed on Mondays)

Proceed with an excursion to Ellora caves (Close on Tuesday) & Daultabad Fort.

Ellora Caves – it was constructed between 600 to 1000 CE, located in the Sahyadri hills western Ghats in Aurangabad, Ellora included the temple of Hindu, Jain, and Buddhist caves, more than a hundred caves with only 30 open for tourist or public dig from the hills called charanandari.

Later we will visit with guide Daulatabad Fort constructed by Mohammed Tughlauk in the fourteenth century.

After breakfast proceed with an excursion to Ajanta caves & on return back City tour of Aurangabad. (Close on Mondays)

Later proceed with city tour of Aurangabad visiting Bibi-Ka-Maqbara and Panchakki most of the monuments or mosques like the Kali Masjid,Shahganj Masjid, Chuk Masjid or Lal Masjid.

Early breakfast and then transfer to the airport to board a flight to Hubli via Mumbai. Meeting assistance on arrival at Hubli airport and drive to Badami (140 Kms/3 Hours)

Aihole is the cradle of the stone temple the southern Dravida School. this is the oldest temple constructed in fifth century  A.D.

Explore The Megumi Temple is built of 630 small zie Ravanaphadi cave has some beautiful carvings.

Pattadakal -reached the Chalukyas kings from the 7th to 09th Centuries. Temple has pillars depicting the life of Krishna. Virupaksha temple has sculptures and panel scenes from Ramayana & Mahabharata.

Continue to drive to Hospet &check-in at the hotel

After breakfast proceed to visit Hampi

Hampi is a charming and beautiful city during the Vijay Nagar kingdom also the capital of this empire, here you will find some sculptures and ruins in the Virupaksha, Vittala, and Hazara Rama Temples where you will big Lord Narasimha, Lord Ganesha picture on the elephant house (stables).

After breakfast check-out and drive to Hassan. On arrival check-in at the hotel

The evening will be free at leisure

After breakfast visit Belur & Halebid. The Chenna Kesava temple is 900 years ago is an exquisite example of Hoysala art. Halebid’s 12th-century Hoysaleswara Ho Kedareswara temples are masterpieces of Hindu art. On the return, if time permits visit Sr Sravanbelgola, hewn out of a single rock and visible from a distance of 25 km of the statue of Lord is bathed with milk and honey once every twelfth year.

Early morning, arrive at Madurai Railway station and transfer to transfer to hotel in Madurai

Take a rest till late afternoon after overnight train Journey

After breakfast transfer to Madurai Airport to board a flight for Bhubaneshwar via Chennai.

Arrive Bhubaneswar in the afternoon. Meet upon arrival & transfer to the hotel.

After breakfast proceeds to Konark to see the beautiful Sun Temple built in the 13th century in honor of Surya, the Sun-god, containing exquisite stone sculptures. The life-size lions and elephants, figures of warriors on horse, scenes of battle, all sculpted with great imagination and skill; testify to the high standards of ancient India art and engineering skills.

Later in the afternoon return to Bhubaneswar and Visit of Caves- Khandagiri and Udaygiri hills were carved and tunneled, to create this multi-storied ancient apartment residence for Jain monks.

After breakfast proceed with a full-day excursion to the Lalitgiri, Ratnagiri caves, situated on the hills of the Assia range, 90 kms from Bhubaneshwar(incorrect). These caves are unique examples of Buddhist art, sculptures, and iconography of the 2nd century BC. The caves have yielded a rich crop of antiquities.

All transfers, excursions and sightseeing tours to be by A/C Car for 2-3 Pax; A/C Tempo Traveller from 4-7 pax& A/C Mini Coach for 08-09 pax

Local stationed English speaking guide in each city during sightseeing

Assistance at airports & Railway stations by our company representatives

Camera fees (Still/video) at any monuments

Any tipping or Porterage anywhere

Any item not mentioned in inclusion