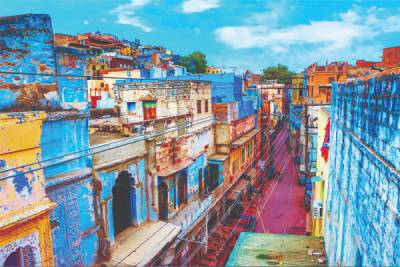 Places to visit in Jodhpur

One day we were watching TV and heard socking news on television one of young famous movie star Sushant Singh Rajput has committed suicide in his room. It was big shocking news for my friend because one of my friends is a big fan of Sushant. Few days later my friend was watching his movie Shudh Desi Romance. I also sat next to him and was watching a movie. Whole story based Rajasthan. We were talking about Rajasthan and decided to make a short tour to Jodhpur in the month of December and we have selected some places to visit in Jodhpur for you. How to reach Jodhpur

By Air: Jodhpur is well connected by Air Delhi, Mumbai and other cities.

By Rail: Jodhpur is well connected by Delhi, Jaisalmer and other cities by railways.

By Road: Jodhpur is well connected by Jaipur, Jodhpur and Udaipur.

From Here We began our Rajasthan tour with Marwar Region of Jodhpur, also known as the Blue City, The Grand scale of hospitality in Rajasthan was something that we encountered.

We reached Jodhpur railway station in the morning around 1005 hrs and went out for some light breakfast in a local shop after the long train journey. We have come here with sufficient time in hand.

Before check-in to the hotel we wanted to explore some Best tourist places to visit in Jodhpur because our check-in time was 1400 hrs. so we decided to visit Mehrangarh Fort.

We contacted our local agent in Jodhpur who handled our file and requested him to arrange a local guide for a city tour.

Mehrangarh Fort:   This is the first places to visit in jodhpur When we reached the entry gate our guide was waiting there we bought the entry ticket and entered the fort.  We entered into the fort and stopped one point then our guide explained about the history of fort then he started 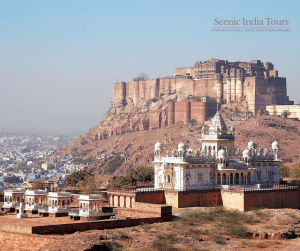 where we are standing right now it is called the Mehrangarh fort and The Mehrangarh Fort- a symbol of the pride of Jodhpur t and the fort is 70 feet wide and 117 feet high and  it was built in 1459 by Raja Rao Jodha.

Presently a fort run by the private trust, the fort has been divided into multiple sections. For entry there are 7 gates and Jai Pol and Fateh Pol Darwaja are the most important among them.

Inside the fort has many palaces which include Moti Mahal, Rang Mahal, Chandan Mahal and Phool Mahal. The round roof of Phool Mahal is finely carved with gold.here there is a chair where the Maharaja Sitted called Srinagar Chaki.

Later our guide took us to the fort where we can enjoy a beautiful view of the Blue city of Jodhpur. He said that Jodhpur’s other name is “Surya Nagri ” (abode of Sun).

At the highest point of the fort there are two big cannons, also from here you can see the beautiful view of the sun set and the whole of Jodhpur in blue color.

There is also a small museum in the fort where royal palanquins, miniature paintings, furniture,old instruments and historical armory are kept which symbolize Rajputana culture.

Jaswant Thada : if you see the Taj Mahal in Agra and it is almost familiar with this Taj Mahal, This building was built by Maharaja Sardar Singh of Jodhpur in 1899 in memory of his father Maharaja Jaswant Singh Second. 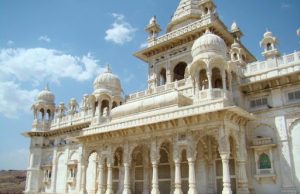 It looks like a temple from outside, inside you will find more late royal family members photos in Hall. It is famous as Taj Mahal of Jodhpur. 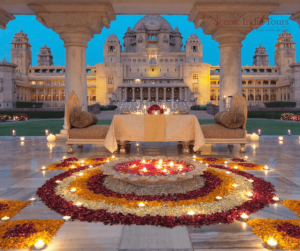 Umaid Bhawan Palace: This is one of  best places to visit in jodhpur The Umaid Bhawan palace is located on court road and it was constructed by Maharaja Ummid Singh. Being on Chitra pahari the palace is also called Chitra Palace.

It is managed by Taj Hotels. The palace has approximately 350 rooms and is also the principal residence of the royal family of Jodhpur. It is spread 27 acres of area, this palace including 16 acres of wide garden and has a sitting room, a private meeting hall, a court hall to meet the public, a vaulted banquet hall, private dining room, a ballroom, a library, an indoor swimming pool

Granite floors and the inner dome of the palace are the major attractions of this palace. So whenever you go to Jodhpur, be sure to enjoy this luxurious palace. 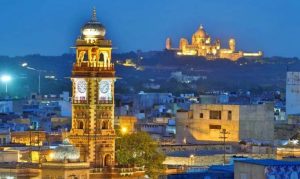 Clock Tower or The Ghanta Ghar: surrounded by the sardar Singh markets of Jodhpur, it was built 150 years ago by Maharaja Sardar Singh, which is a major tourist attraction in Jodhpur. Mandore Garden: “Beauty always infuses a new positive energy in our mind.” The Mandore Garden is one of the most beautiful gardens in Jodhpur city . it is a major tourist attraction due to the amazing natural beauty and stone art creations.

This 6th century garden is a symbol of excellent architecture and great heritage. The embroidered workmanship of the chhatris made at Panchkunda near Mandore Garden may surprise you, it is said that these canopies were built in memory of the queens of Mewar. 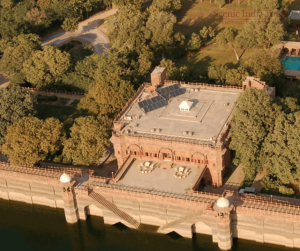 Balsamand Lake: Located 5 kilometers away on Jodhpur -Mandore, this stunning Balsamand Lake attracts a lot of tourists around the world. It was built of red sandstone and typical ornate Rajput architecture is a heritage of ancient heritage.

Balsamand Lake palace is also situated in the middle of Lake, the royal family of Jodhpur used to spend their summer time in this palace, and presently this palace was converted into a heritage hotel.

Balsamand Lake was built in the 13th century as a reservoir that supplied drinking water to the city. Surrounded by lush green gardens, this lake is surrounded by various types of trees such as mango, papaya, pomegranate, etc.

You can take a long stroll near the water of this lake and at the same time you can sit in the restaurant of Balsamand Palace and see the beautiful lake and sunset. 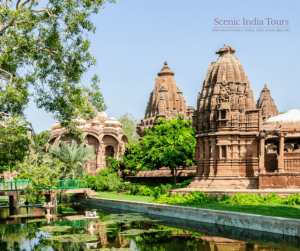 Mahamandir: It is the desire of all of us to see God and receive his blessings and it is equally pleasant to see the famous shrine of major places. The Mahamandaleshwar or Mahamandir of Jodhpur is the oldest temple here which was built by Nath Mandal in 923 AD.

Dedicated to Lord Shiva, this temple with 84 pillars depicts the intricate postures, motifs and other artifacts of the temple. The interior decoration of the temple is done with fine paintings and carvings which is a major tourist attraction. 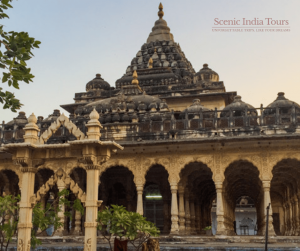 There is a hall in the temple which is famous for yoga arts and classes. This temple is 2 km from Jodhpur. Located far away due to which it is the main center of travelers and devotees. Whenever you come to Jodhpur, you must visit this temple.

Chamunda Devi temple: This temple was built in 1460 by Maharaja Rao Jodha, it is  a royal temple located near to Mehrangarh fort Mother Chamunda is the favored goddess of the royal family of Jodhpur.

Earlier, the mother Chamunda used to be considered only in Jodhpur and nearby people and worshiped her. But people’s faith in Maa Chamunda increased after the 1965 war, the reason behind was that in 1965 India and Pakistan war. 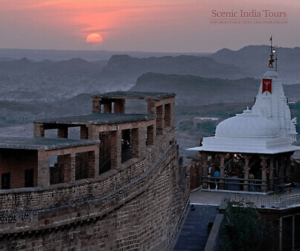 when Pakistan targeted Jodhpur and wanted to be destroyed but mother Chamunda appeared as a eagle and saved the lives of the Jodhpur people and somehow No loss of Jodhpur was during war, Since people of Jodhpur have unwavering faith in Mother Chamunda.

The Guide said that the glory of Mother Chamunda has been so high that today there is hardly any village or city outside Jodhpur where people do not believe and know mother Chamunda.

Every year at the time of Dussehra, a lot of devotees come to the evening Aarti. Locals consider this to be defense shield of Jodhpur.

Machia Biological Park:  this park located just 09 kms outside the Jodhpur City. Which is a natural habitat of wild cats, desert fox , rabbits and monkeys.

Apart from this park is famous for bird lovers, here you will find many bird species inside the park. There is a fort in this from there you can enjoy Evening Sunset View.

These are the last places to visit in Jodhpur 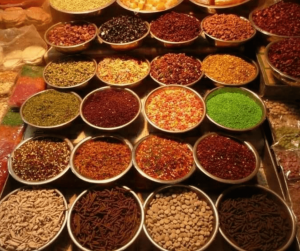 From bangles to footwear, colorful dupattas to beautiful earrings, everything from handicrafts to cultural arts is unique in Jodhpur city. Hence, the markets here are also unique and are decorated with colorful colors.

Clock Tower Market : For the finest variety of spices

Sarafa Bazar: for clothes and antiques and delicate handicrafts

If you visit these Places then you will get a unique experience of Rajasthani, Mewari and Rajputani heritage, these Places with an aura of culture offers a unique scene that touches the heart of tourists. 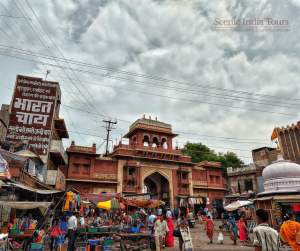 Whenever you go to Jodhpur , Please do not forget to visit these markets because for the shopping enthusiasts, there can be no better place than this.

People who love to eat try to try new dishes. The cuisine of Jodhpur is very rich and many Indian dishes are believed to have originated from this metropolis. It is known for its spicy, delicious sweets and attractive and highly spiced snacks.