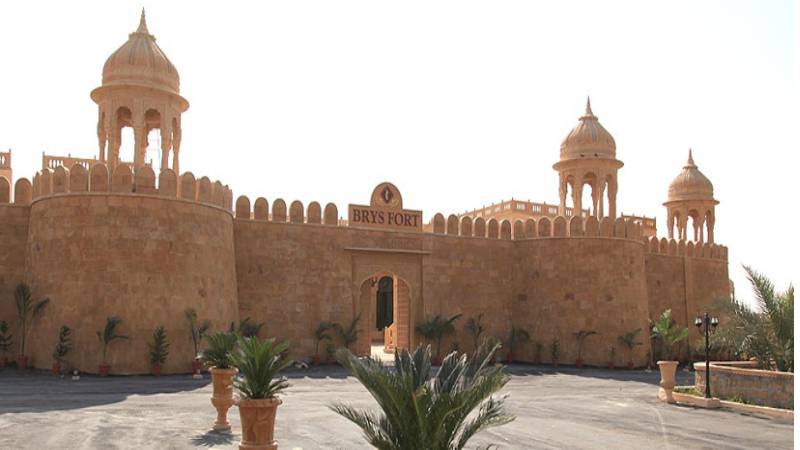 This tour package, you will have the possibility to experience the enormous joy that is generated by closely observing the Taj Mahal in Agra, which shows that man is capable of creating true wonders. You can also feel enormous pleasure observing the temples and monuments of cities like Jaipur, or New Delhi. In the same way, you will experience a true return to the past knowing the “ghost town” of Fatehpur Sikri. Enjoy Beautiful fort, Havelis and temples in Rajasthan, this tour fill your life with exoticism traveling to India.

You fly from home country to Delhi. Upon arrival, you will be welcomed by your representative or driver who will take you to your hotel in Delhi. Here you will stay for the first two nights.

Delhi, the second-largest city in India after Mumbai, is an important city for the economy of India. But Delhi also houses a cultural center with universities, theaters, museums, galleries, and historical buildings from the Mughal times. Delhi was the capital of British India from 1912 to 1931. In the city are therefore many British colonial buildings and large parks after the British example. The first impressions of India are overwhelming: the busy traffic, the many people, and a cow on the street here and there. You will enjoy a city tour with your driver with a Local English speaking guide, who will take you to the old Delhi and new part of the city. Old Delhi has an impressive old wall and narrow streets. You drive past the Red Fort, the most luxurious palace during the time of the Mughal Empire. You will also pass by Raj Ghat, the place where Mahatma Gandhi was cremated. Before seeing the more spacious new part of Delhi, visit Jama Masjid, India’s largest mosque, and Chandni Chowk, the lively and colorful market of the old city. In the new part of Delhi, you will see the Qutab Minar. This 72-meter high tower is one of the best examples of Islamic architecture in India. The brown-red color of the earth and the buildings here contrast beautifully with the colorful robes of the Indian women who visit the tower. On the way back to the hotel, drive through the embassy area, and see the government buildings.

Your driver will take you to Rajasthan. On the way, you get a beautiful picture of life in the villages and you see farmers working on the land. In the afternoon you will arrive in Mandawa where you will stay overnight. In this village, the medieval atmosphere of times gone by revives. If you walk through the streets with a guide, you will see the many merchant houses, the so-called Havelis. Mandawa is also referred to as the “open gallery” of Rajasthan because the city is dotted with these Havelis, which are richly decorated.

The journey continues westward. During the drive to the Thar Desert, you will see that the landscape is becoming drier and changing. Suddenly there is “the red city” Bikaner. This fortified city is located on the old caravan route between Africa and Western Asia. The city is surrounded by a seven-kilometer-long wall with five gates. The beautiful and refined fortresses and palaces, which are made of red-pink sandstone, testify to the rich history. You will visit the Junagarh Fort with a Local English guide, which was built by Raja Rai Singh. The beautiful balconies, the many pavilions, and temples make this fort one of the most beautiful in Rajasthan. The hotel for this night is located just outside Bikaner. (travel distance approx. 190 km)

Jaisalmer is in the western part of Rajasthan.  Jaisalmer, the city rises like a mirage from the Thar Desert. Like Bikaner, Jaisalmer was part of the caravan route between Africa and Asia, making it a prosperous city. The sandstone-built Havelis give Jaisalmer a distinctive color and thus the nickname “the golden city”. The next two nights you will stay in Jaisalmer.

Along with a Local English Speaking guide, you will explore Jaisalmer extensively. The city stands on a ridge of yellowish sandstone crowned by a fortress. This fort contains a palace and a number of ornate Jain temples. There is also a medieval atmosphere in Jaisalmer and the narrow streets are lined with richly decorated Havelis. During a walk, everything reminds of the rich and glorious history of the city. In the afternoon you will drive to the sand dunes near Sam. At sunset, the sky turns red and it seems as if the sky and the desert are on fire: enchantingly beautiful!

In the morning, leave the desert behind and travel east to the 15th-century city of Jodhpur. Jodhpur is named after Rao Jodha, who founded the city. This city is known for its many palaces, fortresses and temples and the surrounding desert landscape that appeals to the imagination. The old town is completely surrounded by a 16th-century city wall. After arrival in Jodhpur, where you will stay overnight, you will visit the Mehrangarh Fort with a Local English Speaking guide, which overlooks the city at an altitude of 125 meters. Every gate of this imposing fortress symbolizes a victory or a deity. From the fort, you have a beautiful view over the surrounding city and you can clearly see the many blue-colored houses, which have given Jodhpur the nickname “the blue city”. You spend the night in Jodhpur.

You travel to Jodhpur en-route to visit Ranakpur. Here you will visit the famous Chaumukh Temple with an audio guide, which consists of more than 1,400 columns. No column is the same! The stunning location and unique architecture compete for your attention! Dedicated to Adinatha, this marble temple is an important shrine to followers of Jainism. Respect for all life is central to this ancient Indian religion. Afterward you will travel further to “the city of sunset”, Udaipur, where you will stay for two nights. Udaipur is beautifully situated between three lakes and dark green hills.

Eklingji village is just over 20 kilometers outside Udaipur. Here you will visit Sri Eklingji, a complex of 108 temples surrounded by a high fortified wall. A dirt road leads to the nearby town of Nagda. Here you can see temples that sometimes go back to the 4th century AD. The most famous temple is the Sas Bahu, where many erotic sculptures can be seen. Back in Udaipur, you will see why this city is known as the most romantic of this part of India. The city is home to lakes, palaces, and fountains. In the shadow of the green hills surrounding Udaipur, the three lakes Pichola, Fateh Saga, and Udai Sagar glisten like jewels among the fairytale palaces. You will visit the city palace built of marble and granite with a view of Lake Pichola. In the evening you take a boat trip on this lake.

Today you will travel to Pushkar Due to the varied nature of the southern part of Rajasthan, where you spend the night. Pushkar is an important holy place for Hindus: the city is one of the five holy dhams, pilgrimage sites. This temple city, one of the oldest surviving cities in India, is located in a beautiful setting on a large lake. The lake is said to have been formed by the tears of Lord Shiva, after the death of his wife, Sati. An immersion in the water of this lake is said to wash away sins. Pushkar has many temples. The most famous is the Brahma temple from the fourteenth century. This is one of the few temples in the world dedicated to Brahma.

In the morning, your English speaking guide will take you on a tour of Pushkar. This relatively small city is known worldwide for the annual camel market that takes place here in October or November. But Pushkar also has a lot to offer outside the camel market. During your exploration, you will visit the Brahma Temple. A walk to the shores of the lake offers a nice view of the city. At the lake, which is sacred to the Hindus, you can make a flower offering. The afternoon goes to Jaipur, the capital of Rajasthan, where you will spend two nights. The city was founded in 1727 by the maharaja Jai ​​Singh II, who also gave the city its name.

In the morning you will travel to Amber Fort, from where you have a beautiful view of the area. The fort served as a protection for the palaces of the Maharaja and contains many richly decorated rooms. In the afternoon, visit Jaipur and see one of the city’s most famous landmarks: the Hawa Mahal, or the Palace of Winds. This building was built in 1799 by Maharaja Sawai Pratap Singh. It is a narrow building with many small windows in the front. These windows provided a cool breeze for the women of the maharaja, and this facade offered many ladies-in-waiting the opportunity to get a taste of everyday life outside the palace. Because of the “purdah system”, the women were not allowed to appear in public. The color of the Hawa Mahal contributes to the nickname of the city: “the pink city”. Finish the day with a visit to the city palace and the nearby observatory. Since the sun shines a lot here, this observatory is all about sundials. Although they were made in the 18th century, the sundials still accurately indicate the time.

On the way to Agra en-route visit Fatehpur Sikri, once the capital of the Mughal Empire. Due to a lack of water, the city was already abandoned after only fifteen years of habitation. Now you can see a beautifully preserved ghost town here. The beautiful marble mosque is very important for the Muslims and many pilgrims visit this mosque every year.

You have probably already been looking forward to this day: you will visit one of the seven new wonders of the world, the Taj Mahal, with a guide. This 17th-century masterpiece is India’s most famous building and arguably the most architecturally perfect monument in the world. Shah Jahan had this mausoleum built between 1632 and 1648 for his beloved wife Mumtaz Mahal, who died in childbirth. After his death, he was also interred in this tomb. The Taj Mahal is built entirely of white marble, which contrasts beautifully with the blue sky and the surrounding farmlands. The Mughal Dynasty built tombs in symmetrically landscaped gardens. These gardens symbolize paradise in the Islamic tradition. The tomb stands on a raised platform on the bank of a river so that the structure dominates the wider area. This masterpiece is praised for its perfect symmetry, the refined decorations in the form of calligraphy from the Koran, the marble reliefs, and the subtle play of light, which gives the building a different appearance. After the Taj Mahal, visit Agra Fort, which is also referred to as the Red Fort because of its color.

After a relaxing morning in Agra, travel to Delhi. After arriving in Delhi, you will have a room in a hotel near the airport, where you can prepare for the return flight.

All transfers, tours, and excursion as per itinerary using air-conditioned AC Vehicle

Any airfare (International or domestic).

Passport and Visa fees for India.

Any Lunch / Dinner is not Include

Any meals OR options not mentioned in the itinerary/cost inclusion.

Any item of personal nature and Gratuities.

All personal expenses such as medical expenses, laundry, drinks, telephone and fax services, and all other services not specifically mentioned as included in the itinerary