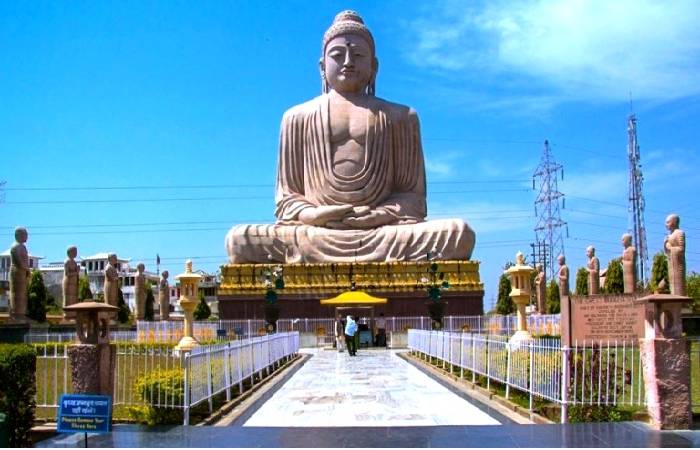 Our 19 Days spiritual journey for anyone interested in Buddhism. You will visit the most important pilgrimage sites of India and Nepal, often connected with life events of Siddharta Gautama, the historical Buddha. For example, visit Lumbini in Nepal, where he was born, the famous Bodhi tree in Bodhgaya, under which he achieved enlightenment, Sarnath near Varanasi on holy Ganges, where he first taught the doctrine, and Kushinagar, where he died. Sanchi and Sravasti is also included in this program, Lucknow – city of Nawabs then we go to Agra to see world famous Taj mahal before head to Bhopal, Excursion to Sanchi Stupa  and Stupa Sanchi and Udaygiri. Our Expert tour guides will give you brief history of Buddhism and the many customs and legends of Buddhist culture.

visit the temple of Mahaparanirvana

Explore the Residency, the Bara Imambara

Excursion to Stupa Sanchi and Udaygiri

Sightseeing of City of Bhopal

Upon arrival (flight details are pending), you will be greeted with a traditional welcome and transfer to the hotel (Room available from 1400 hours).

Breakfast at Hotel, in the morning transfer to the airport for your flight for Varanasi.

Reached at Varanasi and proceed to Bodhgaya by road to Bodhgaya (Approx. 255kms / 6-7 hours). Considered one of the 5 best cities to see Spiritual India This is most important Buddhist pilgrimage place of world.

Breakfast at Hotel. We will proceed to same day excursion to Nalanda & Rajgir, You will visit the sites of Nalanda, where you can see the ruins of the oldest Buddhist University and Rajgir, also known as the “Vulture Peak”, where the Buddha spent some years of his life.

Breakfast, In the morning departure by road to Varanasi (Approx. 255kms / 6-7 hours). Upon arrival, transfer to your hotel. Considered one of the oldest in the world, there are few places in India with as much color, charisma, or spirit as the ghats that bathe along the Ganges River in Varanasi. Late evening we will see evening prayer ceremonies in the ‘Ganga ghats’ (stone steps) of the Ganges river.

Early morning proceed to from the boat on the Ganges river to see the Hindu rituals in the Ghats. Visits include Assi Ghat, Harishchandra Ghat, Panchganga Ghat, Manikarnika Ghat, and Lalita Ghat with the Nepalese Temple and Alamgir Mosque, Old City with the Vishwanatha Temple, Golden Temple, Annapurna Bhanani Temple, and Durga Temple. Return to the hotel for breakfast and later enjoy a city tour, including a visit to the Bharat Mata temple and a walk through the Benares Hindu University. In the afternoon visit Sarnath, the place where Buddha gave his first sermon and we will also visit its excellent museum.

Breakfast at hotel, Departure to Kushinagar (300kms, 7 hours approx.), The place where Buddha raised Nirvana, among others we will visit the temple of Mahaparanirvana, inside which is the great reclining Buddha.

Breakfast at Hotel, In the morning Departure by road to Lumbini (200kms, 5 hours approx.), Buddha’s birthplace. Sidharta Gautama, Buddha, was born in 623 B.C. in the famous Lumbini gardens, which would soon become a place of pilgrimage, Transfer to the hotel.

Breakfast. In the morning we will visit the Sacred Lumbini Garden,  the Mayadevi Temple, the heart of all the monuments in this sacred place. The temple complex bears witness to several layers of buildings over the centuries.

Breakfast at hotel, We return to India, we go to Sravasti (260kms, 6 hours approx.), One of the most important cities in India in the time of Buddha, and where the monsoon era spent 24 years, in the Jetavana monastery.

Buffet Breakfast at Hotel In the morning departure by road to Lucknow (Approx.  180kms / 4-5 hours). You are most welcome to the “City of Nawabs” called Lucknow. the capital of the state of Uttar Pradesh, and which was an important cultural center in the 18th century, and witness to the end of the Muslim government in India.

Morning Breakfast at Hotel, we will visit some of important monuments in Lucknow, visiting the Qaiser Bagh palace, the Sikander Bagh gardens, The Residency – where British citizens took refuge during the 5-month siege in 1857 rebellion or the Bara Imambara, one of the characteristic ceremonial halls from the city.

Breakfast at Hotel,  in the morning visit the Taj Mahal (closed on Fridays), the most fascinating and beautiful monument in India. There is also a visit to Agra Fort, an imposing fortress on the banks of the Yamuna River, built by the Mughal Emperor Akbar in 1565 AD

Breakfast at Hotel, In the morning transfer to the Agra train station to board train for Bhopal.

Upon arrival you will be received our tour guide and transferred to the hotel. The city combines scenic beauty, historicity, and modern urban planning.

Breakfast, In the morning excursion to the Stupa Sanchi and Udaygiri. It is deserted  Palace – monuments have not only survived despite nearly 2,000 years of ignore  but the Sanchi stupa is considered the best and most evocative example of ancient Buddhist architecture in India. Also, visit the Bhimbetka ruins, famous for the large number of cave paintings dating from the Stone Age to the Middle Ages. Executed mostly in red and white with the occasional use of green and yellow, with themes borrowed from the everyday events of eons ago, they usually depict the scenes of hunting, dancing, music, horse and elephant pilots, animal fighting, the collected honey, the decoration of scenes of the bodies, costumes, masking and scenes of the home, etc.

Buffet Breakfast at Hotel, In the morning visit Bhopal, starting with a visit to the Chowk (bazaar), Jama Masjid, The Gohar Mahal, Later transfer to Airport to board flight for Delhi

Breakfast at Hotel, In the morning, visit to New Delhi. Visit the Qutub Minar, a gigantic 72m tower, built by India’s first Muslim ruler, Qutub-ud-din Aibak. Next in this tour is the visit the diplomatic area, government buildings, Rashtrapati Bhawan (residence of the President of India), Parliament, and India Gate (Arc de Triomphe).

In the afternoon visit Old Delhi, passing the Red Fort, built by Mughal Emperor Shah Jahan and enjoy a rickshaw ride (Man-Powered Bicycle Rickshaw) at Chandni Chowk, one of the oldest and largest bazaars in India. Next, we visit the Jama Mosque, the largest mosque in India. We also visited Rajghat, the place where Mahatma Gandhi was cremated on January 31, 1948.

Breakfast at Hotel Room available up to 1200 hours at the convenient time, transfer to the international airport for your return flight with (must be at the airport 3 hours before the flight departure time).

All transfers, tours and excursion as per itinerary using air-conditioned Vehicle

Any airfare (International or domestic).

Passport and Visa fees for India.

Any Lunch / Dinner is not Included

Any meals OR options not mentioned in the itinerary / cost inclusion.

Any item of personal nature and Gratuities.